Inanimate Insanity Wiki
Register
Don't have an account?
Sign In
Advertisement
in: A to Z, Episodes, Season 2 Episodes

A Kick in the Right Direction

"A Kick in the Right Direction" is the fifth episode of Inanimate Insanity II and the 25th episode overall. It aired on November 2, 2013.

It seems that not everyone is pleased with the course this new competition has taken. Marshmallow and Fan are up in arms about an apparent failure on MePhone's part, Nickel expresses disappointment in Knife's attitude, and Microphone's voice, despite her loudness, is not heard by the rest of her team. Who will be sent to the portal next? Will there be tedious golf ball stacking? And with all this change occurring in the lives of the contestants, can they find any room for the possible arrival of "somebody that they used to know?"

The episode begins with Marshmallow and Apple drawing in a flowery field. Apple shows Marshmallow her drawing, a picture of them. Marshmallow calls her drawing nice but then points out that she spelled everything wrong. Apple complains about this, then crumples her drawing into a ball and throws it into a pile of other drawings with wrong spelling. Apple then asks to see what Marshmallow had drawn, but she doesn't want to show it. Regardless, Apple takes her drawing and looks at it. However, she is shocked to discover that Marshmallow's drawing is of a chair and former contestant Bow.

When Apple asks Marshmallow why she drew that, she responds saying that she feels guilty about what happened to Bow. Apple then asks why and answers thinking it was because Marshmallow shut Bow in a box going on a murderous rampage (killing herself). Apple then says no one cares about that, calling Bow "an ugly, disgusting menace." Marshmallow then says she thought Bow was really nice, which Apple hastily agrees with. Marshmallow then wonders that if everyone can magically come back to life, why can't they bring Bow back? She then goes to see MePhone4 if he could bring back Bow.

MePhone4 is then seen under a tree, about to download the "MeOS 7.0" update when Marshmallow comes running towards him. MePhone4 pretends to be inactive, but Marshmallow is not fooled, and demands for Bow to be returned. MePhone4 then asks Marshmallow if she actually cares about her, causing Fan to appear and agree with Marshmallow, saying Bow was a fan favorite.

In this challenge, the teams played a game of soccer. The first team to score five goals would win the challenge, and, as a prize, win Dough on their team. Due to the unbalanced teams, Nickel was forced by MePhone4 to sit out.

Fan managed to block one shot, though he failed to block the next two shots. Apple then attempted to pass the ball to Marshmallow for the second time, but Knife ended up receiving it. After an insult by Apple regarding his Dora dolls, Knife retaliated and was forced to sit out due to foul behavior.

Knife then joined Nickel on the bleachers. From this point on, Nickel would give tips to Knife on how to be sarcastic, shown at intermittent scenes throughout the episode.

The Bright Lights managed to score one goal due to Microphone being preoccupied with talking with Dough, but Yang later scored two goals for the opposite team. After Lightbulb convinced Paintbrush to go to the calm down corner, the Bright Lights were offered four penalty shots, this time with Baseball as the goalie. All of the penalty shots missed, causing the Grand Slams to win the challenge and get Dough on their team. However, Dough was immediately eaten by Yin due to his hunger.

When Marshmallow and Apple are drawing at the beginning, Apple's crayons disappear after the first scene. 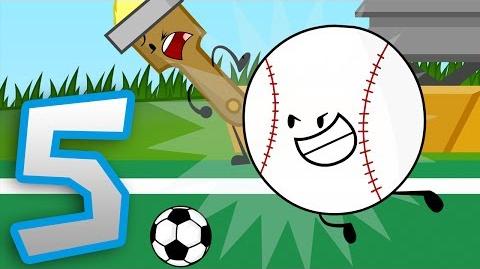