Inanimate Insanity Wiki
Register
Don't have an account?
Sign In
Advertisement
in: Featured Articles, A to Z, The Bright Lights,
and 12 more

"A New Stage In The Game"

Apple, labeled The Forgettable, is a female recommended character by totaldrama23. She debuted in Inanimate Insanity after winning the paint gun contest in "War De Guacamole", and placed on Team Epic. She returned for Inanimate Insanity II and was placed in The Bright Lights. She is voiced by Adam Katz.

Since her debut, Apple has been a notoriously nonsensical, ignorant, and idiotic contestant. Apple's foolishness has caused her to get in countless amounts of trouble, for example, when she forgot how to use a simple paint gun in "War De Guacamole", and she apparently took 27 hours to remember.

She has shown that she has slight intelligence in rare situations, such as in "4Seeing The Future" where she copied Marshmallow's technique (that she used on Apple) of throwing a contestant into quicksand and jumping across.

Despite her initial kind character, Apple is a rather vengeful and cantankerous person. Her feud with Marshmallow only seemed to worsen over time as those two girls continued to become each other's rivals. This may drive Apple to carry out reckless actions, such as in "Breaking The Ice" where Apple threw glass in Marshmallow's face and promptly lights her on fire.

When Apple explains the reason why she hates Marshmallow is that she ruined Christmas for her in "The Snowdown", in "Marsh on Mars", Apple and Marshmallow were quick to resolve their issues and come to a truce. The girls became friends and began to spend more time together. However, this caused a major shift in Apple's overall attitude. As she befriended Marshmallow, Apple began to invest a massive interest in Marshmallow and quickly resulted in Apple developing an excessive clinginess to her. She began to give up her elimination prizes to Marshmallow, solely passes to her in the soccer game in "A Kick in the Right Direction", and literally clinging onto her in "Let 'Er R.I.P.".

Apple's clingy obsession with Marshmallow consequently backfired, as Marshmallow began to dislike all the attention Apple gave her and only saw her as an annoyance rather than a friend.

Apple is a circular red apple with indents on her top and bottom, making her appear rather heart-shaped with two bumps on either of her top and bottom. A dark green stem and single leaf sprout out at the top of Apple's head. Apple's arms are on either side, and her legs branch out from the two bumps at her bottom.

Apple is known for her unique abilities, such as: 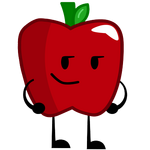 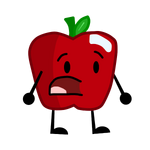 Apple, along with the 9 other potential joinees.

Apple sucking her thumb during the Bright Lights elimination time.

Yin Rips Apple in Half 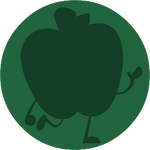