Baxter is a minor character on Inanimate Insanity II. Baxter's first episode is "Kick the Bucket". It was found by Lightbulb in the same episode and Baxter's name was revealed only in an after credits scene.

Baxter is a red crab with shiny, child-like eyes protruding from stems on his head. His pinchers are simplistic, although from Episode 12 onward, he has a more complicated design.

In "Alternate Reality Show", Baxter accompanied Lightbulb and Test Tube to the past and the alternate reality, it also assisted Lightbulb in her plan to return everything to normal by posing as a radioactive crab in the past. Once everything was returned to normal and Paintbrush was eliminated, Lightbulb gave Baxter to them as a parting gift. Due to Lightbulb's scheme in the past, Salt and Pepper were terrified of seeing the crab again. He made a cameo in "Mine Your Own Business" ans was seen in "Hatching the Plan" with Fan and Paintbrush. 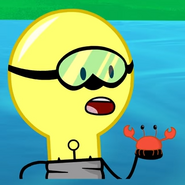 Lightbulb after coughing up Baxter 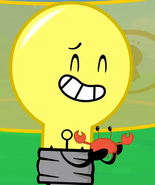 Baxter on Lightbulbs head after Paintbrush opened the chest 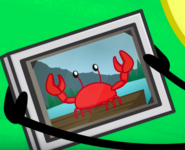 Lightbulb holding a picture of Baxter

Baxter in Test Tube's "secret" lab after Lightbulb coughed him up.

Baxter on a counter in Test Tube's "secret" lab.

Baxter about be sucked through the time machine's portal 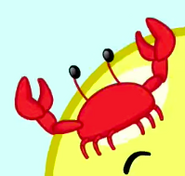 Baxter Cameo in Mine Your Own Business

Baxter in Hatching the Plan