Bomb has a speech disorder, causing him to stutter a lot and it tends to end up with people who are thinking that he is weird and fanatical. But deep inside, Bomb seems to be warmhearted and empathetic, he just doesn't know how to express it (quite literally).

Although seemingly nice, he does show some of a backstabbing and treacherous attitude evident in Double Digit Desert, when he betrayed OJ so he can claim his prize, resulting in his elimination some episodes later. He makes up for it to show some friendships with the tougher contestants who are really hard to become friends with, (e.g.: Knife).

Bomb is a bit slow when it comes to understanding. He will often use the wrong reactions in events, such as him smiling with joy when Balloon comes to talk to him and the other hotel OJ residents. Bomb also does not know what a alliance is when asked. A final example of this is him not noticing how Salt is trying to get closer to OJ when on the ice, where instead he just interrupts the moment saying they should get back now. Bomb has trouble coordinating his eyes, as they are usually seen facing the opposite direction. However in Inanimate Insanity II, he is shown to control it a bit better.

Bomb can also be cowardly. Usually screaming in a high voice when seeing the most simplest things, and usually having a worried/scared expression on his face.

Bomb is a dark grey bomb. He is very similar to a cartoon depiction of a bomb, and he has a maroon colored fuse.

Bomb is known for his unique abilities, such as: 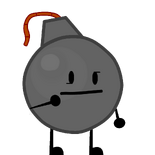 Retrieved from "https://inanimateinsanity.fandom.com/wiki/Bomb?oldid=136919"
Community content is available under CC-BY-SA unless otherwise noted.