Inanimate Insanity Wiki
Register
Don't have an account?
Sign In
Advertisement
in: Featured Articles, A to Z, Box,
and 15 more

Box, labeled The Box, is an actual insentient contestant on Inanimate Insanity II. He is placed with The Grand Slams.

Box currently competes as a contestant on Inanimate Insanity Invitational in The Sinkers with some other contestants.

Box is not shown to have a personality, since he is not alive. Despite this, other contestants treat Box as it were sentient, often speaking to and for him or seeing his silence as shy, wise, emotional or rude depending on the situations.

Trophy is the only character to call out the cardboard material's lifelessness prompting everyone else to defend the inanimate object. Despite that animosity both teamed up in The Participation Trophy were it's also revealed Box idolizes Trophy and "mimics his exercise regimen" using it to swiftly (offscreen to the viewers) navigate the kiddie pool obstacle course earning Trophy's respect despite both of them also losing to Team Cinnamonfinity.

Even though Box seemingly moves sometimes, it's been stated multiple times Box is not a very good swimmer sinking rapidly in any body of water being rescued by Lifering and Yin-Yang.

Box has a simple appearance that accompanies his rather plain and nonexistent personality. He is an ordinary rectangular cardboard box with four sides. A bump-like design runs along Box's sides and splits them into a lighter half above and darker half below. His top can be opened by two small flaps.

The inside of Box is completely empty, except for the written word "box", which Apple notably misreads as "Taco".

Despite Box's elimination in "A Kick In The Right Direction", Box has appeared multiple times throughout the series in the form of background cameos:

In "Theft and Battery", Box appears three times, once behind a counter as Lightbulb mentions knowing "a guy", once inside a glass showcase as Steve Cobs yells at Soap, and finally on a computer screen as Microphone talks to Steve Cobs.

In "Mazed and Confused", Box can be seen hiding behind bushes when Lightbulb is about to be with Fan as her partner.

Box on the ground after he falls 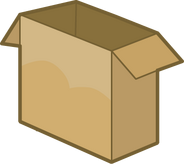 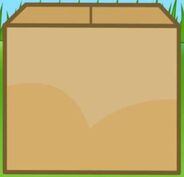 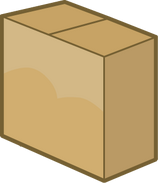 Box as a witness 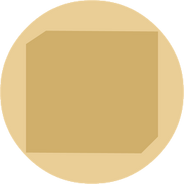 Being framed by Cherries, Lightbulb put him the calm down corner.

Apple telling Lightbulb about what Box did.

Box in the intro. 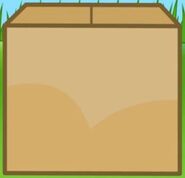 Box cameo in Theft and Battery 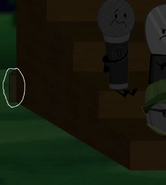 Box Seen in Mazed and Confused