Inanimate Insanity Wiki
Register
Don't have an account?
Sign In
Advertisement
in: A to Z, Article stubs, Season 3 Contestants,
and 6 more

Cabby, labeled The Collector, is a female contestant in Inanimate Insanity Invitational and is in The Pinkers. She is voiced by Casey Landman.

Cabby is a periwinkle file cabinet. Her body is a large vertical rectangle with two drawers on her front. Her face appears on the upper drawer and her arms at her side. Cabby's drawers can open, containing files that she can remove. Rather than having legs, Cabby has four small wheels at the bottom of her body, which she uses to roll.

Upon her first introduction, Cabby has shown an impressively high attention to detail. Cabby is quite resourceful and seems to rely on her files primarily for references, as seen in her first appearance in "Stranded in Paradise", where she aptly predicted MePhone4's team randomization moments before it happened. She is astute in logging information in her files, as she is seen writing information within a file, presumably for later reference. Cabby also seems to be generally intelligent and witful, potentially similar to the likes of Test Tube.

Cabby is also very protective of her files, as seen in "The Shame of the Name", as she scolds Fan for stealing a file of hers, but claims she will happily give out information if asked. She's also seen in the episode to be somewhat manipulative and persuasive as she gets Bow, Goo and Clover to vote Fan out with her. 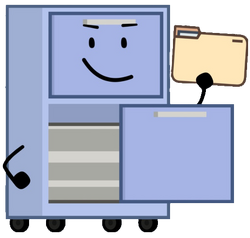