Inanimate Insanity Wiki
Register
Don't have an account?
Sign In
Advertisement
in: Featured Articles, Locations, A to Z

Alternate Reality Show
The Calm-Down Corner is a location that was created for agitated contestants that need to "calm down". It first appeared in Marsh on Mars and has been seen and referenced to ever since.

The Calm Down Corner is simply two brown walls adjoined at a right angle, hence the "corner", which appears to be in an open grassy space. Various graffiti marks have been made by those sent to the Calm Down Corner, such a green line, a green squiggle, a black skull and crossbones, a yellow tic-tac-toe board (O's win), and a crudely drawn OJ. Messages have been written on it as well: "TACO WUZ HEAR", "Praise thy Calm-down Corner", "OU (Object Universe) ROCKS", and "PB (Paintbrush) is a (smudge)".

First showcased in Marsh on Mars, Lightbulb puts Box at the Calm-Down Corner after the Cherries tell her that he sent Marshmallow into space.

In Tri Your Best, although it is not seen, Marshmallow threatens to send Yang to the Calm-Down Corner.

In Cooking for the Grater Good, Paintbrush tells Lightbulb to go to the Calm Down Corner for being replaced as team captain and literally throws Yin-Yang into the Calm-Down Corner after he ate the uncooked pizza that was in the process of being made.

In A Kick in the Right Direction, Paintbrush tries to tell Lightbulb to send Yin-Yang, only for her to send Paintbrush instead. They are seen at the end of the episode, sitting in the Corner, still angry. A new graffiti mark has been made since. It says "I'm coming..." in the same pink color and handwriting as the letters that were in Box.

In Let 'Er R.I.P., the Corner is not seen but is again referenced when Paintbrush asks Lightbulb if she's going to send them to it again.

In Alternate Reality Show, Paintbrush talks to Lightbulb in the Corner. The writing on the walls looks gray and faded.

Box in the CDC.

Yin-Yang in the CDC. 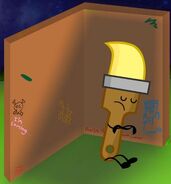 Paintbrush in the CDC.

Lightbulb in the CDC.