Inanimate Insanity Wiki
Register
Don't have an account?
Sign In
Advertisement
in: A to Z, The Bright Lights, Season 2 Contestants,
and 6 more

Red and Green (Stem and Leaves)

The Cherries, labeled The Twins, are male competitors in Inanimate Insanity II. They were placed in The Bright Lights and voiced by Derek Napolitano.

The Cherries are two dark red and round cherries of equal size. At their respective tops, a tall slim green stem extends and forms an angle with two leaves at the top.

The Cherries are two twins who share a brain. As a result, the two individual cherries are technically the same person in two bodies and share the same thoughts and opinions.

The Cherries have a similarity to children, as although they are usually a kindhearted and compassionate duo, they love pranking and making fun of others. The two can be seen putting on shows and acting in miniature to draw attention. If angered, the Cherries have been seen to be very hostile and cruel as well, as seen in "Marsh on Mars" when they knock Marshmallow to Mars for simply ruining their act, and furthermore, blaming the dilemma on Box.

However, following their cruel acts, the Cherries can be quite remorseful and guilty if they take pranks too far, and will apologize and reluctantly take the blame. They have shifted into more light-hearted jokes in Hotel OJ that they dub as "nice pranks," which result in a positive reaction despite pulling a prank, such as surprising Trophy with a flock of butterflies yet giving him something interesting to photograph.

Action wise, the Cherries will normally speak respectively, as one may talk after the other to complete a sentence. Occasionally, a cherry will pantomime (act out/show emotions) while the other talks. The Cherries have also shown to be very experienced and adept mask crafters, creating masks of various characters. 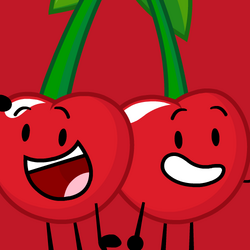