Inanimate Insanity Wiki
Register
Don't have an account?
Sign In
Advertisement
in: Article stubs, A to Z, Season 3 Contestants,
and 6 more

Clover, labeled The Privileged, is a female contestant in Inanimate Insanity Invitational and a member of The Pinkers. She is voiced by Dee Cashin.

Clover is a lime green, four-leaf clover with a long stem protruding at the bottom, which is also where her arms and legs are attached.

Clover has been shown to have a streak of good luck, but is plainly oblivious. This is first showcased in "Stranded in Paradise" after her paint bomb didn't go off during the team selections, which prevented her from being splatted with paint. Clover herself is quite innocent and unaware, being prone to misconceptions due to her cluelessness, and is quick to think and assume, thinking she won the season when the curtains broke, only showing her.

Clover is also shown to get easily distracted by little things. Such as how she didn't do the challenge in "The Shame of the Name" because she saw a butterfly she deemed as cute. And how Cabby convinced her to side with her in the elimination with a butterfly. 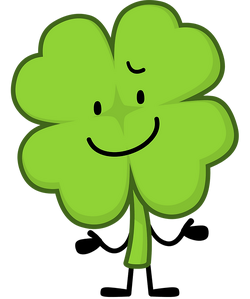