Inanimate Insanity Wiki
Register
Don't have an account?
Sign In
Advertisement
in: A to Z, Deceased, Male,
and 8 more

"A Kick in the Right Direction"

Dough, labeled The Replacement, was a male contestant on Inanimate Insanity II, and the alleged big brother of former contestant Bow. He was placed on the Grand Slams after they won him in the competition but was immediately eliminated after being eaten by Yin-Yang. Like Bow, Dough is unrecoverable and resides as a ghost in Purgatory Mansion.

Dough is a golden-tan ball of cookie and pizza dough. His body is very squishy and can get messy on things easily.

After becoming a ghost, he became semi-transparent, and his legs were replaced by a moving ghost tail.

Dough is a bland and dull blob of apathy, which is curiously the opposite of his alleged sister Bow, who is notorious for her strong enthusiasm. Dough represents an inverse duplicate of Bow, as almost every aspect of his character is a diluted and tedious principle of Bow's.

Dough even mentions that his perspective is to "copy the past" and "never try anything different." Dough has a strange connection to rhyming as well, while his name itself rhymes with Bow, Dough was obsessed with stairs, bears, dares, affairs, and most likely anything else that rhymes with chairs.

While residing alongside Bow in Purgatory Mansion, Dough enjoys mimicking everything Bow does mere seconds after she does it. He still can be annoyed by Bow's constant attention desire, though simultaneously denying his own attention-seeking, which he, of course, mimics from Bow.

His own death caused by Yin-Yang, Dough now have a rather conscious outlook on himself, as he seems to be aware of his own pointlessness and will even possess non-living objects to find more meaning in life. 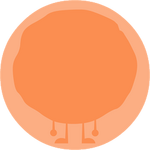 "Stairs are the best!"

If you see well, Dough appears playing a piano.
Community content is available under CC-BY-SA unless otherwise noted.
Advertisement