Inanimate Insanity Wiki
Register
Don't have an account?
Sign In
Advertisement
in: A to Z, The Bright Lights, Contestants,
and 10 more

"The Shame of the Name"

Fan is a red chinese foldable paper fan. His body is shaped like an upside-down triangle with two yellow sticks at either side. The red paper makes several folds on his body, causing triangular bumps at the top. At his bottom the red paper twists.

Fan is socially awkward and quirky. He is the ultimate fan of Inanimate Insanity and tends to mention his blog to other contestants, usually annoying them. Although not the most physical on his team, he manages to be a smart, strategic, and imaginative one, shown when being able to manipulate Microphone to win the challenge for his team in "Tri Your Best".

He is quite an eccentric oddball and is really out there in the circle of normal but he is shown that he is quite confident and self-assured in himself, being unafraid to go on his laptop to update his blog, but it annoys his teammates (particularly Paintbrush) a lot when he only focuses on other topics rather than the challenge.

Fan is also quite idiosyncratic and imperfect, but at the end of the day, he is a team player and always tries his best to focus on the challenges.

Fan is known for his unique abilities, such as:

Fan used to post blogs every so often on the Inanimate Insanity Website. The link was shown during his leg of the triathlon in "Tri Your Best."

The website's blog is now deactivated, but now Fan has a Tumblr, where he posts every so often. 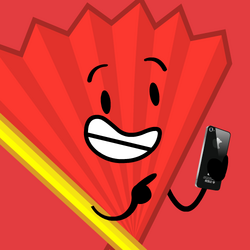