Inanimate Insanity Wiki
Register
Don't have an account?
Sign In
Advertisement
in: Featured Articles, A to Z, Season 1 Eliminated Contestants,
and 8 more

Knife is a silver pocket knife with a dark grey handle.

Knife has an extremely destructive and malicious attitude, being much of a bully to victims such as Paper and Marshmallow in particular. He has shown to be lazy in "A Lemony Lesson" where he told Paper they didn't need to compete. He has the ability to cut into things due to his sharp physical nature. However, he was shown to have a soft side in spite of being so traitorous and mean, as he likes the television show Desperate Housewives and Dora Dolls. He also seems to have had a change of heart in season 2, however, he is occasionally still found being a jerk.

Knife is the only contestant who knows that Microphone is working with Taco. Despite this, Knife has not done anything about it. Knife also takes notice of things others don't such as seeing that Microphone keeps on going away and that Suitcase is quite depressed these days. 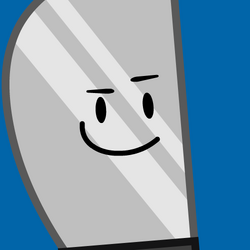