Inanimate Insanity Wiki
Register
Don't have an account?
Sign In
Advertisement
in: A to Z, Male, Minor Characters,
and 3 more

Kumquat is a male contestant on Inanimate Insanity Infinity in an alternate universe who made his debut in "Alternate Reality Show". He is voiced by Thom Jennings.

Kumquat is a high-spirited contestant with a great amount of energy.

As a competitor on Inanimate Insanity Infinity, Kumquat enjoys competing and receiving loads of attention. Kumquat also speaks fast and reminds viewers who he is by restating his name multiple times. He is a self-proclaimed "funny" person, and he is likewise easy to laugh, as he cracks a laugh at Lightbulb despite not saying a joke and continues to laugh hysterically for several minutes afterward.

Since he is full of positivity, Kumquat seems to disapprove of Test Tube's negative emotions. He also seems well aware of what happens to "those ones", or those who are eliminated by Salt and Pepper, suggesting that he's been in the competition for a while.

Kumquat is an oval orange kumquat. He has a olive and brown stem on the top of his body, which also has a lime leaf attached to it. 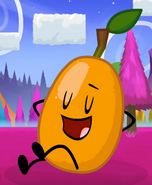 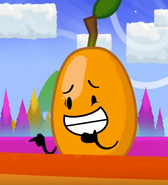