Inanimate Insanity Wiki
Register
Don't have an account?
Sign In
Advertisement
in: A to Z, The Bright Lights, Characters with Abilities,
and 11 more

Lightbulb, labeled The Bright Leader, is a female contestant on Inanimate Insanity and Inanimate Insanity II. She was the team captain of Team Epic, and once again becomes the leader of The Bright Lights, causing her to be a team leader twice. She had enough votes to compete in season 3, but didn't compete due to still competing in season 2. She is voiced by Michael Bruzzone.

Lightbulb is an enthusiastic, kinda lazy, free-spirited and optimistic character. Lightbulb is greatly known for her goofy and ludicrous attitude, given that when she returned for Inanimate Insanity II, her character had completely changed from the clumsy and dizzy leader of Team Epic to a more comical, almighty, and influential chief and commander of Team Bright Lights. This makes Lightbulb the only object in the series to be captain in multiple seasons of Inanimate Insanity.

Given that Lightbulb's personality is quite erratic and unpredictable, Lightbulb may appear as a smart leader one moment, but then become a goofy couch potato in an instant. She will also often display bizarre thought processes, in one manner, she will believe that standing still throughout an entire challenge will cause her to win. In other challenges, she may come up with a thoughtful idea that may lead her to victory or out of a difficult situation.

Lightbulb can be very tyrannical, as she occasionally takes great pride to be in control. She appears almost addicted to leadership, although she has shown to be quite careless of her actions as well. Lightbulb displays her powerful reign while in constant feuds with Paintbrush, as she will use her superiority to make decisions for the team, and even wrongfully send contestants to the Calm Down Corner.

Disregarding her leadership, Lightbulb is a generally kind, caring, and benevolent player, with a large love for cookies. Additionally, Lightbulb will eat inedible objects with ease, such as sticks, balls of yarn, metal buckets, and boxes of fish food. Lightbulb is an extrovert and quite attached to the people she cares about. She is almost constantly around people she likes and commonly in a good mood as well. Furthermore, she is in a noticeably low mood after Paintbrush decides they wanted to stop working with her. When upset or agitated, Lightbulb can be even more careless than usual and act recklessly against herself or others.

According to the crew, throughout the series, Lightbulb feels more separated and wants everyone to be exactly the same. This is further emphasized in "Alternate Reality Show", wherein an alternate timeline, she finds characters who are alike and feels welcome.

Lightbulb resembles a large class incandescent Light Bulb, an electric bulb which produces light with a wire filament heated to a high temperature by an electric current passing through it until it glows. Her face appears on her glass bulb, which is large and shiny yellow. Within her glass bulb, she has a stem sticking out above her metal sleeve. Lightbulb's arms and legs protrude out of her grey metal twisted sleeve, followed by an electric foot contact between her legs.

Lightbulb is known for her unique abilities, such as: 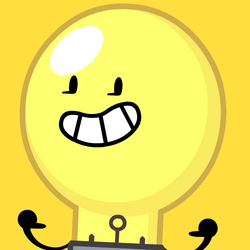