Inanimate Insanity Wiki
Register
Don't have an account?
Sign In
Advertisement
in: A to Z, The Bright Lights, Contestants,
and 10 more

Marshmallow is a small white cylinder-shaped marshmallow with a gray outline, and some shading.

Marshmallow is a naïve, kind-hearted, innocent, fierce, and aggressive player. She is commonly characterized as sweet, joyful, and vivacious with others.

As a critical and occasionally cynical person, Marshmallow is generally concerned only with her own interests and is not afraid to speak her mind without caring about the consequences. Though being so puny and inadequate, Marshmallow makes up for it with strong motivation and usually carries through challenges with ease. Her aggressiveness can sometimes drive her to make rash decisions, such as destroying the bar in "War De Guacamole" to kill OJ, and using Apple to cross the quicksand in "4Seeing The Future". As a result, Marshmallow primarily cares only about herself, and occasionally her select friends, often causing trouble between her and the other contestants.

Marshmallow has been through many unreliable relationships. Marshmallow's friendship has constantly been difficult with Apple, as the two quickly became enemies after Marshmallow ruined Christmas for Apple in "The Snowdown". However, in "Marsh on Mars", Apple and Marshmallow were quick to resolve their issues and come to a truce and spend more time together. Apple began to develop an excessive clinginess to Marshmallow, who disliked the attention she was receiving and began to see Apple as an annoyance rather than a friend. Their relationship turns for the worse following the events of "Let 'Er R.I.P.", where Apple reveals that she was using Marshmallow for the competition, destroying their friendship. In “Everything's A-OJ”, even though Apple tried to apologize to her many times in the episode, Marshmallow rejects and even beat her up with a mop, and displayed a mostly grouchy attitude during the episode. This was later resolved in Kick the Bucket, where Bow not only told Marshmallow that she possessed Apple to say that Marshmallow is a bad person, but get Marshmallow to work up the courage to help Apple escape Hotel OJ to join her, Bow, and Dough in the haunted house.

Marshmallow has become untrustworthy of others and tries to keep her problems to herself. When she opens up to friends, no one seems to understand or give helpful advice. Marshmallow also develops a deep hatred towards the competition and how it changes people. Eventually, Marshmallow is driven to leave the competition and get away from the stress it caused her.

Marshmallow is known for her unique powers, such as: 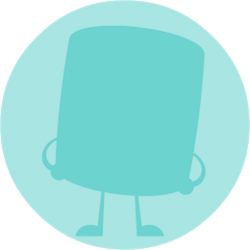