Inanimate Insanity Wiki
Register
Don't have an account?
Sign In
Advertisement
in: Featured Articles, A to Z, Minor Characters,
and 7 more

MePhone3GS is a minor character in Inanimate Insanity II that appears in "Mine Your Own Business."

Much of MePhone3GS's personality is unknown, other than that he was fearful and terrified of his creator, Steve Cobs. He also appears to be very emotionally distressed.

MePhone3GS was a black rectangular phone with a round casing that smoothed his corners. On one side, he had two volume buttons and a ringer switch, and on the other side was a power button. He had a large screen on his front, with gray gradient wallpaper. Unlike his successors, he lacks a front camera. When speaking, MePhone3GS's voice and face glitches and typically cut to static. Across his screen was a massive crack gained in his attempt to steal Prime Shimmer eggs.

Little is known of MePhone3GS's past. Sometime before MePhone4, MePhone3GS was created by Steve Cobs of Meeple Inc.

He first appears in one of MePhone4's suppressed memories shown in "Mine Your Own Business", where he is found in a storeroom. In an old recording he plays, he addresses others as "troops", implying he was some kind of leader.

Following the recording, he repeatedly begs Steve Cobs not to do an unknown action, presumably shutting him down. MePhone4 becomes frightened and runs out of the room, leaving MePhone3GS to loop the recording in growing panic and eventually glitches and deactivates.

In Hatching the Plan, MePhone3GS appears in The Prime Shimmer leader’s depiction of him and multiple other MePhones making contact with the The Prime Shimmers, learning about their organic energy and wanting to harvest it. When they refused, 3GS stole Prime Shimmer eggs with at least 2 other MePhones (possibly the original MePhone and MePhone3G) to harvest their energy in which the Prime Shimmers retaliated by killing the other 2 MePhones. MePhone3GS gained a cracked screen from the attack and managed to steal 2 of the eggs. He was discontinued and put in storage after returning to Earth presumably empty handed. 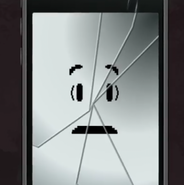 MePhone3GS reaching out to grab the two Prime Shimmer youth.