"Mine Your Own Business" (cameo)"

MePhone4S, labeled, The Terminator, was a supporting character on Inanimate Insanity. He became the temporary host of the show in "4Seeing The Future", and co-hosted in "The Tile Divide". He was voiced by Brian Koch.

MePhone4S appears visually similar to MePhone4, his predecessor. He is a black rectangular phone with a silver casing surrounding his sides. On one side, he has two volume buttons and a ringer switch, and on his top is a power button. He has a large screen on his front which has a red glowing wallpaper with a pair of square-shaped sunglasses. He has two cameras, one on his front and back, as well as a receiver above his screen, and a home button below it. On his back is a large white Meeple logo.

MePhone4S first appeared on the show as a major threat to MePhone4, his main objective is to terminate him and replace him. However, once 4S returned, he had a safer and more caring attitude towards MePhone4, his mission changing to protect MePhone4 from the upcoming MePhone5. MePhone4S's original attitude was harsh and savage, showing he enjoyed the death and suffering of contestants. His return first did display this personality but changed once the real topic of MePhone5 came into play, he became very protective and disregarded his previous harsh attitude.

MePhone4S has Siri and is the only one shown having Siri. Siri calls MePhone4S' her master and can manifest objects, as seen in 4Seeing the Future. Siri likes him and treats him with respect.

MePhone4S has been shown to have a talking hand, shown when he says "talk to the hand" in an episode. The hand says hello. Not much is known why he has this but it has only appeared in Season 1. In Season 2, MePhone4's new hand isn't seen talking anymore. A possible reason was explained in a live stream, where they said, "He cut off his pinkie finger, which was where the hand's brain was." Whether this is canon or just a joke is unknown. It's also unknown if the talking hand has a gender, but he is presumed to be male, like MePhone4S.

In Sugar Rush, MePhone4S first appeared hiding behind a bush, eavesdropping on Pickle and Marshmallow during the Pickle's picnic. After they leave, he slides across his screen, turning his red eyes into his sunglasses. He later appears confronting Cheesy, saying he was a recommended character. Cheesy located him towards a bench, but MePhone4S turned and walked away, returning with a red car and slamming into Cheesy. At the end of the episode, 4S reappears after MePhone4 yells at Apple, 4S saying perhaps MePhone4 is the one who should go away.

In "4Seeing The Future", after a moment of MePhone4S and MePhone4 confronting each other, 4S explains that he was just announced, out-dating MePhone4 with his M5 chip and voice recognition technology Siri, meaning that he must "terminate" him. 4S does this by luring MePhone4 with a cookie, and firing a gun, killing MePhone4. He directs Elimination Time!, where he disregards the show's rules and makes his own, as he multiplies Pickle's votes. After realizing he misplaced the cookies, he calls upon Siri to generate 5 cookies on a plate. Pepper ends up being eliminated, and he immediately starts the next challenge, to cross a quicksand pit, breaking up the teams as well. Once the challenge was finished, MePhone4 is revived due to time travel, and retakes his position of the show, pushing 4S into a quicksand pit.

In "The Snowdown", MePhone4S is not actually in the episode, but he is seen in the Happy New Year picture, faded behind OJ and Salt.

In "Aquatic Conflict", 4S makes another hidden cameo appearance within a photo in this episode, this time during the world tour slideshow. He can be partially seen hiding behind an Easter Island head.

In "Crappy Anniversary", 4S makes even more hidden appearances in this episode. He is very briefly partially seen during the elimination when MePhone4 calls Marshmallow's remark "just sad". His faded silhouette is also seen behind a cloud during Taco's cliff dive.

In "Inanimate Smackdown", 4S solidly appears behind another cloud while Marshmallow cries in agony on Idiotic Island.

In "The Tile Divide", MePhone4S makes his return, randomly landing on and shattering OJ. He first crushes Paper's juice box for not knowing who he is and walks over to MePhone4. After a few moments of arguing, 4S demands host man-ship and threatens to kill OJ if not. MePhone4 gives in and allows MePhone4S to co-host, appearing during the elimination, where he interrupts MePhone4 and proposes chainsaws as the elimination prize, opposing to lollipops. After Bow is eliminated, although MePhone4S suggests a deathtrap challenge, which only Taco agrees to participate in, MePhone4 announces the Tile Terror challenge. Once OJ wins, MePhone4S takes the losers and throws them into his deathtrap. This aggravates MePhone4, as he decides to send 4S off. Before 4S is launched into a small cage, he begins to warn MePhone4 that someone is coming, but doesn't finish his warning.

In "The Penultimate Poll", MePhone4S's sunglasses briefly appear inside the voting box when MePhone4 is instructing the eliminated contestants to vote for someone to be eliminated.

In "Journey Through Memory Lane (Part 1)", 4S escapes the cage off-screen and re-approaches MePhone4.  When 4 protests, 4S briefly tells him to "talk to the hand", which actually speaks. He then explains he had returned to save him from a new threat, MePhone5, who then appears, and 4S explains how advanced he is compared to the two of them, and quips that "nobody saw this coming".  4S manages to shoot 5, allowing them to escape and hide atop the elimination area, where 4S explains it's his mission to help 4.  MePhone5 suddenly flies in a knock down the elimination area, and 4 and 4S fall towards the ground.

In Journey Through Memory Lane (Part 2), 4 and 4S end up surviving the fall, and run off moments after 5 teleports near them. Later, 5 manages to get the million-dollar case in his hands, but 4S lunges at him and knocks the case from his hands, but shot by 5's plasma gun. After 5 explains that he will replace 4 and 4S, 4S grabs Taco nearby and fires a lemon, knocking MePhone5, MePhone4, and Evil Bow, who jumped in, off the cliff, killing them all.

After the contestants sadly discuss the death of their host, stating there was no way to bring him back. MePhone4S then proposes to downgrade himself to "MeOS4", which will bring back MePhone4, though Siri orders 4S not to go. MePhone4S utters one last goodbye before Paintbrush slides the bar, and his body collapses, but it stands back up with a blue screen loading the old software.  After a few moments, MePhone4 is recovered, with his old Episode 1 voice, but it is quickly changed back to normal.  The contestants deduce that MePhone4S had some good in him after all.  OJ mentions this in his speech, saying that the reason for 4S's sacrifice is that he knew the true meaning of friendship and felt more fulfilled than when he was a murderous villain.

In Marsh on Mars, although MePhone4S does not appear, there is a mask of MePhone4S in the group of masks created by Cherries.

In Everything's A-OJ's fake sneak peek, he is shown behind everyone.

In Mine Your Own Business, in one of the visions, a picture of him on a piece of paper appears on Steve Cobs' desk on the bottom of MePhone4's paper. He is also indirectly referred to by Cobs, in this offhand line: 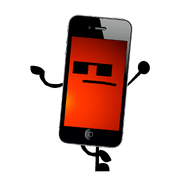 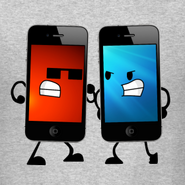 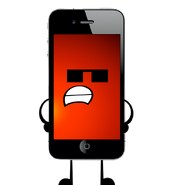 MePhone4S hidden in the background of an April Fools sneak peek of Episode 7.

Retrieved from "https://inanimateinsanity.fandom.com/wiki/MePhone4S?oldid=135035"
Community content is available under CC-BY-SA unless otherwise noted.