Inanimate Insanity Wiki
Register
Don't have an account?
Sign In
Advertisement
in: A to Z, Meeple, MePhones,
and 6 more

MePhone5S is a minor character in Inanimate Insanity II.

So far, his only appearence is in "Let 'Er R.I.P.", though he was briefly mentioned in "Theft and Battery". He is also the first new MePhone to appear in Inanimate Insanity II along with MePhone5C.

MePhone5S is a white rectangular phone with a gold casing surrounding his sides. On one side, he has two volume buttons and a ringer switch, and a power button on the other side. He has a large screen on his front which has a gold glowing wallpaper. His face consists of single-lens rectangular sunglasses and his "mouth" is a black shockwave. He has two cameras, one on his front and back, as well as a receiver above his screen, and a home button below it, which also acts as a fingerprint scanner.

MePhone5S first appears in "Let 'Er R.I.P." and Marshmallow and Paintbrush are talking behind a bush. He randomly appears in Marshmallow's spot, sending her flying. He introduces himself when Test Tube interrupts and says "MePhone5S! With the new M7 chip and retina display? WOWWIE!" Similar to MePhone4S and MePhone5, his goal is to kill MePhone4.

His powers appear to be the ability to teleport, to fly, and his fingerprint scanner apparently can be used to detect things as he tried to find MePhone4 with it. MePhone5S also appears to have a significant other: MePhone5C. He asks Fan and Test Tube where MePhone4 is, but they lie and tell him that he just missed him and that he is by a cliff. MePhone5S and MePhone5C are fooled and teleport to the cliff. He has trouble detecting MePhone4, so he uses his fingerprint scanner. When he uses his detector, it shines a blue light and makes him jump around jerkily.

When that doesn't work, he then asks MePhone5C to go down and check it out. She says that MePhone Maps says to fly straight down, but then bumps into MePhone5S, and they both fall downwards screaming. Afterwards, a splash is heard, then coughing and getting electrocuted, and finally an explosion. Fan comments that killing the two was easier than he thought, and Test Tube stated that "It's like they get less intelligent every generation. Hmm... huh." 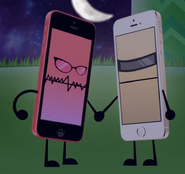