Inanimate Insanity Wiki
Register
Don't have an account?
Sign In
Advertisement
in: A to Z, Minor Characters, Male,
and 3 more

Mecintosh, labeled The Relic, is a minor character who appeared in "Theft and Battery". He is an old, outdated Meeple computer created by Steve Cobs back in the 1980's who seems to reside in Meeple Headquarters.

Mecintosh is an old white and gray boxy computer. His black screen displays a green pictorial face, similar to how an old computer displayed green text in the MS-DOS interface. He also appears with a floppy disk slot, as well as a classic rainbow Meeple logo.

in Theft and Battery, Mecintosh appeared inside Meeple Care, a room inside Meeple Headquarters, suddenly showing up on a patient bed as Suitcase attempts to steal the MePhone4 Battery. At first, he startles her but allows her to take the battery before reminding her that she's stealing. As Suitcase begins to leave, Mecintosh tells her friends "only care about [her] when there's something [she] can give to them." Suitcase is stunned, and he continues, telling her "betrayal is inevitable" and "the clock is ticking", promptly chanting "tick-tock, tick-tock" over and over until the shot changes to Steve Cobs, who happens to continue the "tick-tock".

Mecintosh stands as a peculiar character in Theft and Battery, as Steve Cobs notes that no one has entered Meeple Care for a while, making it odd that Mecintosh, a character with no limbs, was able to enter. However, he might've been put there by Steve Cobs. Another thing to note is how Mecintosh appears with knowledge of Suitcase's alliance, even when he doesn't know her, or any other characters from Inanimate Insanity. This might support the theory that he is one of Suitcase's hallucinations. This has, however, been proven wrong in the episode "Mine Your Own Business", where he appeared in one of MePhone4's memories. This could be possible foreshadowing to the fact that Cobs has been controlling the show from behind the scenes.

"The clock is ticking."

"What are you doing?" 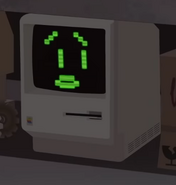 Mecintosh watching MePhone4 run away from MePhone3GS. He shows concern on his face.
Community content is available under CC-BY-SA unless otherwise noted.