Inanimate Insanity Wiki
Register
Don't have an account?
Sign In
Advertisement
in: A to Z, Characters, Characters voiced by Adam Katz,
and 10 more

Renown for his exceptional taste in sarcasm, Nickel is a critical character who is also snarky, churlish and ill-tempered. Nickel's most identifying trope is his trademark sarcasm, which he uses to convert mean thoughts in his head in order not to come off as rude and disrespectful to others. Though this strategy may not always work, Nickel still considers sarcasm as an art, and himself an artist.

As an armless character, Nickel is unable to accomplish feats as easily as others but is usually determined to try his hardest. At the same time, Nickel expresses a large disinterest in competing in many of MePhone4's challenges and is commonly seen with a grumpy expression when competing.

Although Baseball is the leader of The Grand Slams, Nickel occasionally takes over the initiative and gives out orders to others. However, Nickel's sarcasm and wit make him appear shrewd. As a result, he does not typically work well with others, and may instead make rude and opprobrious comments or insults about them, causing drifts in his relationships.

Nickel is close with his armless alliance, consisting of Baseball and Suitcase, and can be seen working together as a trio in most challenges. Nickel is considerably untrusting, however, as he repeatedly attempts to disassociate his alliance with competitors like Cheesy, and most notably, Balloon, who continues to try to redeem himself. However, Nickel's abrasive and argumentative attitude against Balloon contrasts deeply with Suitcase's open-heart. Although he appears to be extremely ruthless and doesn't value friendship, Nickel cares about his alliance, as highlighted by Baseball, but has a difficult way of showing it. In "Kick the Bucket", Nickel claims that Balloon was tearing the alliance apart, and wanted to conserve their bond. Much to Nickel's surprise, Suitcase notes that the two rarely even talk to one another, leading to many inner conflicts in the alliance. Despite being quite intolerant, unforgiving, and antipathetic to an extent, Nickel forms a great bond with Baseball, whom he is loyal to.

Upon entering 'Inanimate Insanity Invitational' and being placed on The Sinkers, Nickel once again creates an alliance, this time with Box and, regrettably, Balloon, with whom he still continues to distrust. On the other hand, Nickel begins "listening" to Box and putting his full faith in him and though Nickel does begin to develop a slight friendship with Balloon, they continue to have issues.

Nickel is also shown to enjoy mentoring others about sarcasm. As seen in "A Kick in the Right Direction", Nickel attempts to teach Knife how to use sarcasm, which Knife now uses occasionally as well.

Nickel is a round coin-shaped character with two sides - heads and tails. His body, including his rims, is shiny silver. His face appears on the heads side, and his legs are at the bottom.

Due to many voters misspelling Nickel's name as "Nickle", the votes were not counted for "The Stacker", causing Lightbulb to be eliminated. After many fans raged on Lightbulb's elimination, resulted in the votes for "Nickel" being re-counted, eliminating Nickel, and bringing back Lightbulb, this also started the character Nick-Le, whose only quote so far is, "I'm highly offended!!" 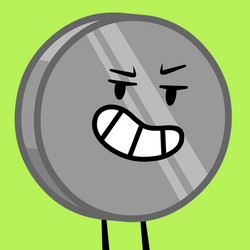