Inanimate Insanity Wiki
Register
Don't have an account?
Sign In
Advertisement
in: A to Z, Characters voiced by Taylor Grodin, Characters,
and 8 more

OJ (occasionally Orange Juice), labeled The Normal Guy, was a male contestant on Inanimate Insanity and a member of Team Chickenleg. He eventually became the winner of the first season. He is voiced by Taylor Grodin.

Although he is not a contestant in Inanimate Insanity II, he has made multiple minor appearances, even being a temporary host on "Everything's A-OJ."

He returned in Inanimate Insanity Invitational, as a member of The Thinkers.

OJ is a tall cylinder shaped glass with a circular opening at the top. Inside, he is filled with orange juice.

OJ is a relatively calm and mature contestant. He is notably knowledgeable and intelligent many times throughout the series, making up ideas to complete challenges and forming multiple alliances, though he can come across as naive and stubborn at times. Amongst the cast of various atypical characters, OJ is considerably the most typical of all. He is logical and an empathetic kind person with a level-headed approach to problems.

OJ usually approaches challenges with scrutiny and a passive attitude. Though he can occasionally be quite competitive in challenges and usually tries to win for himself, his alliance or his team, he commonly criticizes challenges before taking them, and overly complains, as mentioned by Pickle in "The Penultimate Poll". OJ will even goes as far as suing MePhone4 or writing up safety concerns for negligence later on in the series.

As the winner of Season 1, OJ since retired as a contestant and overtook the role of owner and manager of Hotel OJ. He has since grown more mature and leader-like and caters to various other contestant needs, though he is constantly overworked and tired with the burden of multiple responsibilities of other contestants.

OJ was reluctantly admitted into the third season, Inanimate Insanity Invitational, despite stressing about not wanting to leave the hotel unmanaged and growing more stressed about the idea of vacationing. According to his Exit Interview, OJ is most happy when he's productive and fixing problems around the hotel, and in "Stranded in Paradise" he notes that even the word "vacation" makes him feel weird. To compensate for this, upon joining The Thinkers, OJ took more of a leader position after his experience as a hotel manager and frequently made decisions for the team, often butting heads with Paintbrush who strived for the same thing.

Occasionally when in positions of power, OJ can be quite clumsy and inconsiderate at times, going as far as eliminating Suitcase by random choice as the temporary host in "Everything's A-OJ". In times of stress, OJ can be quite pessimistic and cynical, and in extreme cases, lose his temper enough to get into fights, as seen in "The Overthinkers". However he will usually try and apologize or rectify the issue immediately.

Click here to view the coverage of Orange Juice. 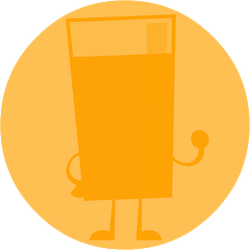