"Rain On Your Charade"

Orange Juice, more commonly known as OJ, labeled The Normal Guy, was a male contestant on Inanimate Insanity, as he was a member of Team Chickenleg. He eventually became the winner of the first season.

He is not a contestant in Inanimate Insanity II, but he did become a temporary host of it on "Everything's A-OJ." He is voiced by Taylor Grodin.

OJ is a tall cylinder shaped glass with a circular opening at the top. Inside he is filled with orange juice.

OJ is a mature contestant on Inanimate Insanity, as mentioned by his character label, however, he can be quite naive and innocent. He has shown to be extremely knowledgeable and intelligent many times throughout the series, making ideas to complete a challenge. He apparently does not like to eat chocolate and has aquaphobia. He commonly criticizes challenges before taking them, and overly complains, as mentioned by Pickle. OJ is very competitive in challenges and tries to win himself. He tries to help Paper with his mental issues throughout the first season, showing that he has a compassionate, delighted, and kind side, though he probably does show his compassion to Paper as Paper is implied to be his best friend. However, in "Everything's A-OJ", he can be quite clumsy and inconsiderate, being unable to find the eliminated contestants in his own hotel, as mentioned by Knife. He can also be quite pessimistic and negative as well, showing his negativity towards the remaining contestants. This hostility also expands to the new ones, specifically Suitcase, even as a replacement host. He eliminates her because of a quarrelsome argument between the teams. 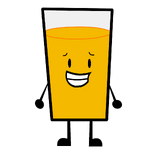 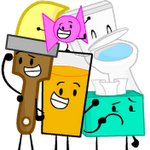 no fires in the hotel

Retrieved from "https://inanimateinsanity.fandom.com/wiki/Orange_Juice_(OJ)?oldid=129071"
Community content is available under CC-BY-SA unless otherwise noted.