Inanimate Insanity Wiki
Register
Don't have an account?
Sign In
Advertisement
in: A to Z, The Bright Lights, Contestants,
and 11 more

Paintbrush is a responsible contestant who is pragmatic in their approach to challenges and life. They take the game very seriously compared to other contestants, and try to corral their team into trying their best at challenges and taking as few risks as possible. They hold their friends and allies' best interests at heart. In some ways, their problem is that they care too much; when things don't go their way and their teammates don't try their best, they are prone to angry outbursts. When they're angry, sometimes they resort to physical violence and yelling (like when they punch Fan and say they hate him in Mazed and Confused).

Although they are a skilled leader, they are outranked by Lightbulb and her outside-the-box ideas. Although Paintbrush shows a willingness to work with Lightbulb in some episodes, they often butt heads because they are both stubbornly set in their ways.

They are a compassionate, loyal friend, as seen when they try their best to comfort Marshmallow, and are always there to save Nickel in Season 1 when things go awry. Paintbrush is both outspoken and very impatient, so they are not unfailingly kind. This is especially true in Season 1 episodes such as The Snowdown, where they're unnecessarily rude to Apple and MePhone 4. They are also shown to be petty at times; examples of this are present when they still feel angry at OJ for besting them in the Christmas Challenge in The Penultimate Poll, even though it'd been months.

Paintbrush has a long rounded body with a square head. A silver metal rim surrounds the top of their head. Paintbrush has yellow bristles that form a pointed brush that emerges from the metal rim. At the bottom of their body is a hole cut out in the center of Paintbrush's torso. In comparison to other contestants, Paintbrush is remarkably tall, as Knife says in both season 1 and 2.

Paintbrush is known for their unique abilities, such as: 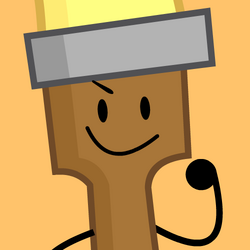