Inanimate Insanity Wiki
Register
Don't have an account?
Sign In
Advertisement
in: Featured Articles, A to Z, Male,
and 7 more

Pickle is a dark green pickle with small bumpy lumps on him.

Pickle is a laid-back contestant who has a sweet but idiotic mind. While often mellow and easygoing, Pickle can be excited and courageous in challenges despite not doing well, such as in "The Crappy Cliff" where he boasts about his cliff-jumping experience, but immediately fails in 3 seconds. He is also not very good at simple tasks like throwing a ring in "The Penultimate Poll" or completing a video game level in "Breaking the Ice". He will nonetheless try his best in challenges, even when his foolishness gets in the way.

Pickle is overall unintelligent and often wrong about many things, like stating how Marshmallow is "blue" in "One-Shot Wonder". Furthermore in "Aquatic Conflict", he mistakenly places an eye patch over the wrong eye after he is hit in his right eye by a lemon.

Pickle cares about his friends, most particularly Taco, as he was one of the few contestants who respected her. His bond with her mostly stemmed from both of their low intelligence, but Taco soon revealed her stupidity and friendship with Pickle were merely an act to gain positive viewership in "Journey Through Memory Lane (Part 2)". Taco's betrayal deeply upset Pickle and affected his personality to become much more impassive and less open to others.

In "Everything's A-OJ", it's revealed that Pickle still bitterly holds onto his past experiences with Taco, despite their emotional harm, and refuses to read any letters from her. 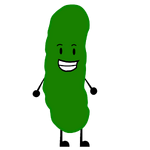 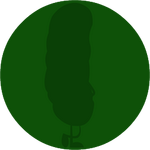 Pickle with the Statue of Liberty

Pickle on the MeLife Recovery Center.

Pickle with Knife in episode 7.

Pickle with Knife in episode 1.