Snapshot Showdown is the 3rd episode of Inanimate Insanity Invitational and the 35th episode overall. It was released on June 12, 2021.

After a sensitive photograph spoils MePhone's grand opening, he challenges the teams to take embarrassing pictures of each other. And so begins an epic photoshoot-out! Which contestant will look the most embarrassing? Or could it end in a "photo finish?" And seriously- what is up with the pinecones? Find out in the THIRD episode of Inanimate Insanity Season THREE!

MePhone4 firstly welcomes everyone to the grand opening of the Pic-Nix table.

The fans voted for Balloon to receive immunity.

When MePhone4 takes a bite out of his triple chocolate cookie, most of the chocolate chips disappear. 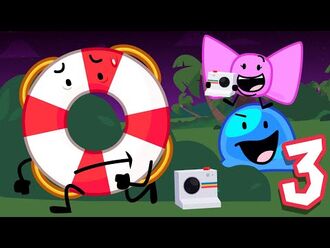