Inanimate Insanity Wiki
Register
Don't have an account?
Sign In
Advertisement
in: Featured Articles, A to Z, Female,
and 7 more

Soap, labeled The Neat Freak, is a female contestant in Inanimate Insanity II. She was placed on The Grand Slams. She is voiced by Kacie Chapman.

As a conscientious yet relentless player, Soap excels in maintaining order. At the start of the series, Soap is often seen fretting over germs, and can usually be seen cleaning things with the small blue cloth she carries around with her to scrub and wipe things, even if they are already somewhat clean. Her fear of germs proved to be a distraction from the competition.

Despite Soap's need to constantly clean, she is a kind and formidable competitor at heart with a penchant for leading. In "Cooking for the Grater Good", after noting her cooking etiquette, Soap nominates herself as acting captain for her team in the pizza making challenge, with the approval of Baseball. Soap's confidence, outspoken nature, willingness to listen to her team, and enthusiasm for challenges makes her a natural leader. In "Everything's A-OJ", Soap once again takes upon the role as leader to inspire and lead her team efficiently through song.

However, Soap's newfound power over her team causes her to become ruthless in challenges due to her competitive nature and often act out of line. This is first seen when she uses Cheesy to make her team's pizza in "Cooking for the Grater Good", but also when she threw Toilet out of her team's hot air balloon at the opposing team in "Theft and Battery".

Soap shows a desire to become the best version of herself. She recognizes her compulsion to clean as a defense mechanism and takes steps to get over it, as seen in "Rain On Your Charade" as she tries to throw her cleaning supplies off a cliff. Soap also shows an intuition for helping those around her improve themselves, giving Microphone and Suitcase sound advice during her elimination. Her understanding of what their struggles were could bely an observant nature with attention to detail.

Soap is a white round soap bottle with a face inside a square pink label with pink horizontal stripes above and below. On her head is a pink cap with a pink pump. Her arms are on the sides and her legs are at the bottom of the bottle. 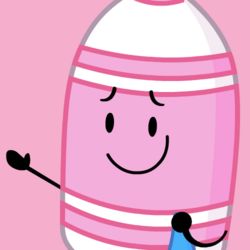