Rain On Your Charade (mentioned)
Mazed and Confused (actual appearance)

Starfruit is a minor character on Inanimate Insanity II and the lead singer of Spoiled Lemon.

Starfruit is a single slice of yellow star fruit. His yellow color fades to the center, where it has seeds.

He was first mentioned in Rain On Your Charade, by Microphone, who said that he was an attention hog anyway in the band, after Knife mentioned that the Spoiled Lemon has gone downhill since he left, during the elimination.

He appeared in Mazed and Confused and had the starting speech for Spoiled Lemon, after the announcer stated that the band has finally "reunited". In the speech, he said sorry to all of his fans, which Fan take it personally for him, for leaving the band. In the following, it is noted that he left the Spoiled Lemon, most likely because he lost faith in his music skills. He eventually got back with the band - which surprised everyone - because "someone" helped him that his music was inside him all along.

He winks at Lightbulb, who because of this, could be presumed to be that "someone", who winks back and left Fan in shock. He ends the speech and begins the performance with a loud "LET'S ROCK!", singing A Party before and as the credit rolls, which astonished and "reconciled" everyone watching the concert, with Starfruit being its Lead Singer once more. 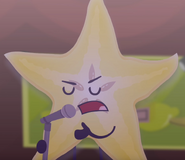 Add a photo to this gallery
Retrieved from "https://inanimateinsanity.fandom.com/wiki/Starfruit?oldid=127142"
Community content is available under CC-BY-SA unless otherwise noted.