Steven "Steve" Cobs, labeled The Creator, is a minor character that debuted in "Theft and Battery".

Steve Cobs is the big-headed, brash, pompous, egotistical, and persuasive founder of Meeple Inc.. He is often full of himself. His intelligence is also stated in his remarks he says to the contestants. He is seen as being scary and creepy when people underestimate his intellect. He is also very arrogant and presumptuous when Balloon stated that the Meeple watch is dumb, which he later popped him for it. He becomes wicked and manipulative when the contestants leave with the egg and battery and later claims that he will be in charge sooner or later.

When the crew arrives at Meeple, Steve Cobs introduces himself and welcomes them to the headquarters. after a while of thinking, Baseball gets the pun, which was in his name. A firm believer in the concept that the future is so yesterday, Cobs seems displeased by the prospect of a MePhone4. Only when the Bright Lights run in and he notices Fan's egg does Cobs seem to change his tune and agree to give them the battery after a tour. When doing so, he cites that he "appreciates that, really, you have no idea," and though this can be assumed to refer to Fan's compliment about the headquarters, he does not definitively specify.

When Microphone brings up her concerns that Cobs created MePhone5S and MePhone5C to kill MePhone4, not help him, Cobs replies that MePhone4 is his business partner. He mentions that the "staged fights" on II get him a lot of product placement. Microphone seems skeptical, but Knife interrupts, shocked by the fact that the MePhone fights were all fake. Cobs concludes that MePhone4 lied in order to garner better dramatic performances from the contestants and lets the idea sink in for a moment, causing the contestants to consider their trust in MePhone4. Fan later goes up to Cobs bringing up the comment, unsure of if to believe it. Cobs assures him that "of course some of it" is true and that the show brings great product placement, along with other possibilities that Cobs vaguely refers to.

Cobs shows off the garage in which he built his first computer to the contestants. He mentions that he hasn't spoken to his parents ever since having ripped out the garage from their home. Fan is impressed. When Toilet excitedly notices a wire in one of the display cases, Cobs says that though he's glad Toilet likes it, it is merely a wire and urges the crew to move on.

Cobs overhears Soap talking about a "big head" and mistakenly assumes she's referring to him. Though at first, he seems angry, he covers it up and says that he appreciates the gesture, apparently since having a large ego is flattering to him.

Cobs repeatedly states "Tick tock" in order to emphasize the latest Meeple gadget, the Meeple Watch. Balloon doubts its significance, explaining that his current watch already displays the time and that the idea of taking calls on a watch is "dumb." Appalled, Cobs hits a button and a contraption appears from the floor that pops Balloon. Cobs pretends to be upset and blames Soap, "always looking for trouble." He announces that the tour has been completed.

Fan mentions that he wishes he could give to the world the way Cobs has, which gives Cobs the opening to state the potential the egg has to change his scientific community (first stating the overall community, but quickly correcting himself). He politely asks for Fan to loan it to him so he could do some research, even remarking that one of these days Fan will be an innovator and a thinker just like him. When Fan realizes that, by Cobs' slogan, the egg is destined to eventually become a product of yesterday, Cobs changes course and says that Fan has done enough thinking for one day. Since the egg is not really Fan's, Cobs concludes that Fan shouldn't feel a sense of responsibility for it. Fan does, however, and politely declines to give it to Cobs. Cobs momentarily looked peeved, but offers another suggestion, claiming that if he receives the egg, the Bright Lights can receive the MePhone4 battery immediately. Test Tube and Paintbrush stand up for Fan, with Paintbrush telling Cobs to "stop getting all creepy." and Lightbulb replying if Cobs wants to get all creepy, she knows a guy. Cobs displays a new level of creepiness when he tries to forcibly take the egg, but Suitcase's unexpected entrance and the triggering of Meeple's alarms interrupts the whole debacle.

Cobs drops Fan (and the egg with Fan holding the egg) on the floor, concerned about addressing the fact that something may have been stolen. He shuts off the security alarms as if they're a car alarm, and accuses Soap of being the culprit, as her "big head" comment means she's jealous of his knowledge. When Cobs realizes all that was stolen was the MePhone4 battery, he laughs and says they can keep it and the egg. He declares, "It's just the beginning, and I'll be in control soon enough. It's only.. a matter... of time!" and throws one of his Apple Watches on the floor, breaking it. He adds that the watches also bend to no one in particular.

In an after-credits scene, Cobs gives a computer the room in which Suitcase stole the battery so that it can be repaired. He mentions that they've gone several months without any patients, but Cobs' concept of time is hampered due to his broken watch from earlier.

In the first flashback, he introduces himself to MePhone4 right after he named him. Before he was about to finish his sentence, MePhone4 suddenly interrupts him by saying a joke "I put the "uncitional" in functional." He says that it's "the fun" but he immediately dismisses his sentence and hits MePhone4 in his right arm. He tells MePhone that he may feel nervous about his future tasks, that's because MePhone4 has an emotion emulator. But MePhone4 interrupts him again, but this time he is asking for food. Steve unamused, explains to MePhone4 that he is the latest technology that doesn't need food. 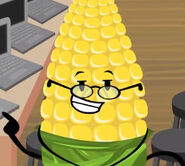 A close-up picture of his face

When Suitcase sets off the alarm

When steve cobs innovates on the meeple watch

Uh... I'll have to get back to your battery find.

"Oh no, he's gone, who did that, I bet it was that Soap Girl, always looking for Trouble!" 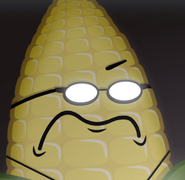 Add a photo to this gallery
Retrieved from "https://inanimateinsanity.fandom.com/wiki/Steve_Cobs?oldid=120054"
Community content is available under CC-BY-SA unless otherwise noted.