Suitcase, labeled The Pushover, is a female contestant on Inanimate Insanity II. She had enough votes to compete in season 3, but didn't compete due to still competing in season 2. She is placed on The Grand Slams. She is voiced by Samuel Thornbury.

Suitcase is a small brown wooden suitcase. She has gold straps on her sides.

Suitcase is a passive, yet submissive individual. She tries her best to avoid conflict and tends to be a huge pushover. Because of this, people may take advantage of her gentle and compassionate demeanor.

Following her peaceful and passive traits, Suitcase is also very kind, gentle, empathetic, and tender towards everyone around her. She has a habit of keeping her feelings to herself and hides them from everyone. Suitcase is especially meek and tends to hide her emotions. This also makes her quiet sometimes, indicating that she only talks when necessary, as in "Rain On Your Charade", she blindly agrees with Nickel's rash statements when asked for affirmation.

Although she tends to be reserved, Suitcase is also quite timid, cowardly, and easily frightened when alone, and commonly lacks the courage to do things on her own. In "Let 'Er R.I.P.", she is relieved to travel to Purgatory Mansion with the rest of her alliance but is easily scared off by the mere beginning of Nickel's scary story.

Suitcase is displayed as the kindest character in the show, trying to help others whenever she can and is always giving emotional support to her friends. Unlike her former alliance member, Nickel, Suitcase is greatly trusting of other characters, she also treats everyone in a sweeter and kinder way than him. Suitcase befriends and deeply trusts Balloon, and goes to great lengths to include him in challenges, despite him being constantly ostracized by the rest of The Grand Slams.

Suitcase often feels pressured by other people, and will often follow orders despite not agreeing with them, such as stealing the battery in "Theft and Battery" or fetching a bucket underwater in "Kick the Bucket." These pressures are seen to build up stress inside Suitcase and cause vivid hallucinations that torment her. She hears voices which she believes to be real, as shown in "Mazed and Confused" when she replies to one as though it is a person talking to her.

When counseled by Baseball or Knife when stressed, she shows off an extremely contemptuous and dismissive side, and she speaks rather insolently. However, when given the right motivation, Suitcase will stand up for herself and others for what she thinks is right, in spite of any repercussions. 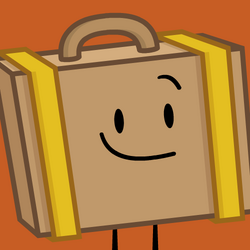