Team Chickenleg is one of two teams in the first season of Inanimate Insanity, the other being Team Epic. The team consisted of Balloon (the captain), Pickle, Taco, OJ, Pepper, Bomb, and Salt. Paper, who rejoined the competition mid-way through the season, was also on the team. Bow also unofficially joined; she was never placed on a team but appeared with it anyway. Taco brought up the team name when she blurted out "CHICKEN LEG!" when MePhone4 asked for team names.

The Contestants are in the order that they were eliminated. 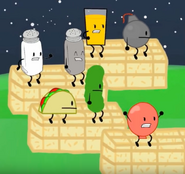 Retrieved from "https://inanimateinsanity.fandom.com/wiki/Team_Chickenleg?oldid=126936"
Community content is available under CC-BY-SA unless otherwise noted.