Inanimate Insanity Wiki
Register
Don't have an account?
Sign In
Advertisement
in: Featured Articles, A to Z, The Bright Lights,
and 9 more

"The Crappy Cliff" (Technically, due to the events in "Alternate Reality Show")

Test Tube is a tall glass beaker in the shape of a thin cylinder with an opening at the top, surrounded by a wider glass ring. Inside Test Tube is an unknown slime green liquid substance. In Inanimate Insanity Invitational, the liquid became a little bit blue.

As a proud, prospective, and self-proclaimed scientist, Test Tube devotes her life to the education of science. Since her debut in "Breaking The Ice", Test Tube has displayed an incredible amount of knowledge and intelligence in all areas of science and can be assumed as the most intelligent and creative contestant on Inanimate Insanity II. She talks with a strong vocabulary and enjoys making scientific calculations at random.

Test Tube enjoys explaining scientific terms and facts, despite if other contestants didn't ask her to in the first place. Because of her constant science clamor, other contestants may find her irritating or annoying. Consequently, Test Tube may become socially awkward around many contestants who don't share the same interests, even regarding her inept social ability as her "specialty". She can occasionally mutter to herself or make weird noises when in uncomfortable situations, and even confesses to her strange behavior in "Let 'Er R.I.P." after Fan does the same.

Along with her great intelligence, Test Tube is an impressive and masterful engineer. She was able to construct the rocket in "Marsh on Mars" within seconds and designed her own secret laboratory full of many inventions and gadgets, as seen in "Tri Your Best". However, Test Tube is quite possessive and secretive of her creations and harbors them away from the public, hidden underneath a Dr. Fizz Machine.

When encountering others' lack of intelligence or sensibility, Test Tube can become incredibly frustrated. Throughout "Alternate Reality Show", Test Tube angrily deals with Lightbulb's mishaps in constant rage or aggravation as they become stuck in an alternate timeline. Test Tube will also put her dedication to science ahead of her friendships, as seen in "Mine Your Own Business", she does not trust Fan with the egg and refuses to give it back to him.

Occasionally, Test Tube can also be very witless or somewhat silly. In "Theft and Battery", she foolishly tosses handfuls of rice on MePhone4 after he shuts down, not only doing the technique wrong but for the wrong reason as well.

Test Tube has also proven to have an extreme form of atychiphobia or the fear of being wrong. If Test Tube makes a miscalculation or is proven wrong, the result can cause her to undergo a massive amount of stress, enough to literally make her shatter.

Click here to view the coverage of Test Tube. 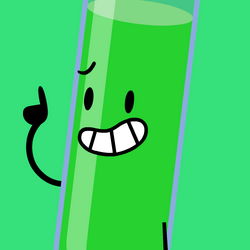