Inanimate Insanity Wiki
Register
Don't have an account?
Sign In
Advertisement
in: A to Z, Articles under construction, Episodes,
and 4 more

The Shame of the Name

Welcome back to Inanimate Insanity Invitational, where MePhone can never leave well enough alone! As he forces the contestants to trash their old team names and form new ones, relationships and rivalries are formed in turn! But amongst all of this team bickering, self-reclamation, and an insurmountable love of pink, who has the time to think up a perfect new name?! With one contestant soon to be sent packing, it’s sink or swim!

Somber music plays as Test Tube conducts a memorial service for Boaty, the boat that transported them to Paradise in the previous episode, and hands it over to Yang, who prepared a eulogy for Boaty, though he states he "did not like the boat" but did like when it exploded and wishes Boaty "exploded more". He politely thanks the audience and leaves the podium, met with scattered applause. After the service concludes, Fan approaches Test Tube and reveals he found a file about himself while they were riding inside of Cabby during the previous challenge. Test Tube reluctantly reads the file and becomes immediately shocked at the amount of notes Cabby has written about Fan. Startled by the detailed information, Fan asks how Cabby knows about all of it, which The Floor, revealed to be eavesdropping, questions as well. Fan greets The Floor and expresses that his conversation with Test Tube is private, though The Floor misunderstands and simply allows them to continue their conversation while he remains. Fan and Test Tube slowly walk away while The Floor happily enjoys the day.

After the intro, Nickel sits with Balloon and asks if Balloon voted for Blueberry last episode. Balloon reassures him and jokingly asks if he voted for himself, which Nickel laughingly calls "pulling a Balloon", but denies he did not. Tea Kettle enters holding a tray of snacks and asks Nickel and Balloon if they'd like any hors d'oeuvres, which the duo declines. Tea Kettle sadly walks away while Nickel and Balloon whisper, but she quickly comes back in and insists they eat the hors d'oeuvres, causing Nickel to angrily yell that they'll eat them later. Furious, Tea Kettle turns red and screams, emitting steam, when suddenly The Floor appears once again and asks if he can have one, though Tea Kettle steps on him and tells him to get lost.

After MePhone4 happily sets off a loud alarm to round up the contestants, Candle asks for a more soothing noise, which MePhone4 disagrees with, and explains that today's challenge is in the contestants' hands. Silver Spoon complains about doing more work, while Paintbrush notes it doesn't get any better. MePhone4 is surprised by the attitude and remarks that the Fans and Favorites "live to love this stuff". Confused, Clover raises her hand and asks what they are fans of, which MePhone4 answers "the show of course!". Cabby corrects MePhone4, noting that although she knows more than most about the shows history, none of the new characters are "fans". Fan notices this and asks again in a confessional how Cabby knows everything and reads a passage from his file about his discomposure, which he begins losing his composure over.

MePhone4 then decides to make a new tagline for the show, "Something old, something new, something borrowed and something blue!". Bow remarks that they're not married, while Goo goes off on an analogy about giving a toy car with a broken wheel a new paint job. MePhone4 then announces that the challenge is to come up with a new team name within the time period, with the worst team name going up for elimination. OJ asks how much time they have, though MePhone4 doesn't know and decides to go take a walk and wants the team names ready when he gets back.

Cabby gathers the Pink Team and begins rambling about how to impress MePhone4 while Fan and Test Tube remain distant. Fan decides to approach Cabby and ask, though Test Tube nervously disagrees. Bow remarks she didn't understand what Cabby said, but expresses she likes pink and wants to work with it. Fan asks Cabby, calling her "File Cabinet", to talk for a little bit, which Cabby agrees but asks to instead call her Cabby since "File Cabinet's a little too on the nose" and laughs, while Fan laughs awkwardly with her.

Meanwhile, Lifering announces to the Blue Team that he came up with a new team name and asks if they're up for "a little humility." Nickel facetiously disagrees, confusing Lifering though Balloon tells him to ignore it, but Tea Kettle asks Lifering to get to the point. Lifering suggests the name "The Sinkers", which Balloon and Nickel enjoy, though Tea Kettle is initially unsure of but eventually agrees to and offers another plate of hors d'oeuvres to celebrate. Nickel ignores it and realizes they haven't asked Box what he thinks, only to get a silent response, which unnerves Lifering though Nickel reassures he just wants to "consider other options" and he's "always in his head". A few feet away, The Floor stealthy listens and vanishes.

The Floor reappears amongst the Yellow Team to tell them the Blue Team will be "The Sinkers", upsetting Paintbrush who thinks it's "too soon" because of Boaty. OJ notes that MePhone will enjoy the insensitive nature of the name, but that they'll have to think of something better. Candle suggests the team name should represent all of their collective energy and bring them together as one mind, though Silver Spoon suggests she not talk as much to not sound as stupid. Paintbrush then says they'll have to think of a one-up to The Sinkers, which makes Yang suggest "The Drinkers" because they drink Dr. Fizz, though he doesn't receive any reaction from Yin who thinks it's a dumb name. The Floor thinks it's lame, angering Yang, and Silver Spoon agrees, causing Yang to step on The Floor and punt Silver Spoon up into the air. Suddenly, Candle taps a pink crystal and soothes Yin-Yang, and asks her group to join her in a circle to think together. She guides them through deep breathing, then asks them to think together as one mind as thought bubbles appear over their heads and combine together into one large bubble, with the word "Think" echoing inside. Paintbrush suddenly comes up with an idea, though OJ cuts them off before they can say it, and suggests "The Thinkers", which everyone agrees with, though Paintbrush appears enraged. OJ compliments Candle, while The Floor cracks a joke causing Candle and Silver Spoon to laugh.

Cabby joins Fan and Test Tube away from their team and asks what this is about. Fan reveals the file, shocking and angering Cabby that he took it and says she's happy to share knowledge with others if they ask. Test Tube agrees that they'll ask next time, scolding Fan, who asks again how Cabby knows all the information. Cabby dodges the question and states she's flattered that Fan and Test Tube, who claim to be intelligent, would have an interest in her impressive work, but she's doing it for a good reason and they shouldn't be so concerned. Test Tube seems convinced, but Fan notes she didn't answer anything and questions why Cabby said "claim to be intelligent". Cabby reassures she meant no offense, but notes that the two of them are very niche examples of intelligence, as Test Tube is very good at science but has no knowledge of other areas, while Fan has made mistakes in his own Inanimate Insanity research, noting his blundered trivia that Lightbulb shattered 6 times by "Everything's A-OJ", when it was 7 times, not including an 8th time in "Mine Your Own Business" that Fan caused. Fan becomes angered and reaffirms he is the #1 Fan, and begins criticizing Cabby's files for being inaccurate and she should cite her sources properly. Cabby retorts that her sources are her solace and her files are her evidence, and reinstates that she'd happily rent out a file to Fan, particularly on good manners, if he requests it, and strictly says "Don't touch my stuff" before wheeling out. The Floor, revealed to once again be eavesdropping, remarks that was pretty rough, angering Fan.

Bow and Goo sit together and Goo asks if Bow has any ideas, which Bow just answers "Pink, y'know, like why change it?". Goo turns to ask Clover, though she's off distracted by a butterfly. MePhone4 returns from his walk, though a step counter records him apparently only taking 14 steps, he edits the step counter to display 14,000. Cabby returns and asks Goo how things are, and he freaks out and lies that things are amazing, though Cabby doesn't seem to buy it.

MePhone4 first asks the Yellow Team what their new team name is. OJ begins to answer, but Paintbrush cuts him off and answers "The Thinkers". Balloon angrily points out that they stole their name, though Paintbrush claims they were "creatively inspired", Tea Kettle threatens The Floor will end up "six feet under". MePhone4 likes the name, and turns to the Blue Team, as Lifering looks to Nickel for Box's confirmation, he answers "The Sinkers". Though MePhone4 recognizes they flipped their embarrassing loss from the previous episode, he believes their name is a cheap rip-off of The Thinkers, angering Tea Kettle to throw her hors d'oeuvres on the ground, much to the delight of The Floor. MePhone4 finally turns to the Pink Team, who haven't come up with a name, and Goo begins to stall when Bow suddenly jumps into the air and shouts "The Pinkers", confusing MePhone4, though Goo begins a long and thorough explanation that the name is inspired by MePhone4 for giving them the color pink and it becoming a part of their group identity. Though initially touched, MePhone4 hates the name and denotes The Pinkers as the losers of the challenge. Bow slumps down sadly and says she thought it was a good name while Clover is surprised they lost, stating it's a new feeling. Fan suggests they didn't know any better, but then angrily says unlike some people who know everything, looking to Cabby, and walks away. In a confessional, Test Tube says she understands Fan's discomposure and even adds she's not feeling up to par because she can't compete with Cabby's collection of notes.

On a beach at sunset, Bow sits sadly on a rock while Cabby approaches and peers into a file about Bow, noting she "Likes pink", "Likes chairs", "Died... (?)", "Came back to life (?!?)" and "need more info." Cabby greets Bow and tells her she talked to Goo and Clover and they won't vote for her, but that Fan had attitude and they should work together. Bow asks if this is an "appliance", but Cabby says no and asks for Bow to vote with her. Bow seems unsure, so Cabby brings up that Fan once broke a chair, though the word "chair" becomes distorted and Bow seems to not understand, but eventually agrees. Cabby departs and writes in Bow's file as Goo approaches and asks Bow if they're working with her, which Bow seems unsure about since Cabby's scary and made her head hurt.

At night on the beach, The Pinkers gather at the elimination area and MePhone4 asks them if they're happy with the name Bow chose, as Goo says he's embraced it, and Clover agrees. MePhone4 then announces the immunity vote was decided by the viewers, surprising Cabby. MePhone then displays the immunity votes:

The viewers voted for Bow to receive immunity.

Bow happily cheers as MePhone4 questions why the viewers voted for her. MePhone4 then begins to read the elimination votes. 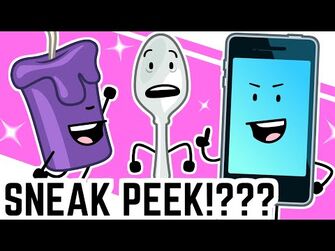 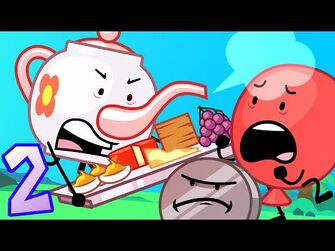