Inanimate Insanity Wiki
Register
Don't have an account?
Sign In
Advertisement
in: Featured Articles, A to Z, The Bright Lights,
and 7 more

"Hatching the Plan" (voice only)

Tissues, labeled The Sickness, is a male contestant in Inanimate Insanity II. He is placed on Team Bright Lights. He is voiced by Taylor Grodin.

The most obvious thing about Tissues is that he is very sickly. Since his debut on the show, he has become infected with a contagious disease known as the "condiShAWn". This condiShAWn allegedly has a lot of symptoms, which Tissues lists in The Issues with Tissues. These include "muscle spasms, triple migraines, violent nausea, uncontrollable heat waves, toothaches, vertigo, vertistop, vanishing fingerprints, temporary blindness." Only some of these exist in real-life; it's not clear if these are all real symptoms or not.

Regardless, is obvious that his condiShAWn makes him prone to sneezing. His sneezes are sometimes powerful enough to launch him into the air, and are uncontrollable; he tends to sneeze on other characters a lot. Although he's apologetic about this, plenty of characters are quick to call him disgusting. These sneezes are so big because a lot of his energy is concentrated in them, which explains why he is so lethargic and easily tired. This is shown when Tissues says he's exhausted before the dodgeball competition in Breaking the Ice.

Although his condiShAWn affects many aspects of his life, it is not all there is to him. Tissues still tries to be outgoing, like when he asks to form an alliance with Trophy. Tissues sometimes fails to understand jokes and slang, as he acknowledges how strange Trophy's middle name, "Horseplay", was despite it merely being an idiom.

In The Issues with Tissues, he is also shown to be somewhat difficult, as he goes out of his way to give Fan a hard time with his show (like when he refuses to talk about his condiShAWn). Despite this, he seems to enjoy talking about his condiShAWn. Tissues is also shown to have a slightly inflated sense of his own importance, like when he says that the audience doesn't need to watch any more Fan's Fantastic Features because his episode is the best.

Tissues is a rectangular turquoise box with a tuft of tissue paper sprouting from a slit at the top. His face appears on one of the longer sides. Tissues' arms are on either of the short sides, and his legs appear at the bottom. Occasionally, Tissues may leak mucus from an invisible nose above his mouth. 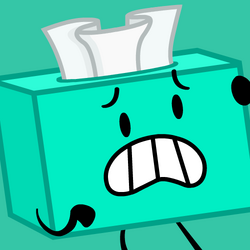