Inanimate Insanity Wiki
Register
Don't have an account?
Sign In
Advertisement
in: A to Z, Season 2 Contestants, Characters,
and 7 more

"Hatching the Plan" (voice only)

Trophy, labeled The Jock, is a male contestant on Inanimate Insanity II. He is placed on The Grand Slams. He is voiced by Justin Napolitano.

Trophy is notorious for being a brutal jock. Arrogant and aggressive, Trophy is highly competitive and athletic, with a progressive aim to win challenges and beat others. His behavior can become mischievous and crude in order to gain victory, such as blackmailing others to do things for him.

Trophy commonly acts cruelly to others to his own entertainment, especially weaker competitors. This behavior is first seen in "Breaking The Ice", where Trophy promptly kicks Tissues off the iceberg after asking to make an alliance. On the contrary, Trophy respects stronger competitors, such as Knife, and even attempts to befriend him, only to later blackmail him into catering to his needs or he would reveal Knife's surprising appreciation for Dora Dolls.

Trophy is genuinely a closed-minded and incompetent individual who treats other competitors harshly, notably those who are smarter than him, as seen in "Marsh on Mars" when he scorns Baseball and calls him a nerd for explaining the perspective of the rocket, and calls Fan "pathetic" for taking care of the egg he mistook for Marshmallow.

Additionally, Trophy finds joy in putting others to shame and making a mockery out of them, but doesn't enjoy if he is put to shame instead and being made a fool, as in "Cooking for the Grater Good", Trophy becomes frustrated when Knife isn't shamed in front of others for revealing his enjoyment in his Dora Doll, and instead, he was proven wrong with Baseball and Apple saying that they don't care, making the rest of the contestants not care either.

However, there is a soft side to Trophy. In the Inanimate Insanity shorts, he is less of a bully. He also reveals that he has an interest in photography. This side to Trophy is best demonstrated in ‘Waffling About’ where Trophy doesn’t try harming Nickel’s sarcastic side. He even surrenders and admits that he lacks much intelligence.

Trophy has a body of gold and a rather hourglass figure, with a large defined head, thin waist, and wide bottom. His face is located on his head, his arms are on either side of his waist, and his legs at his bottom. His head is hollow with a circular hole at the top of his head. On either side of his head are two handles that extend from his top to his middle. He has three darker stripes, one above and below his middle, and one at his bottom. 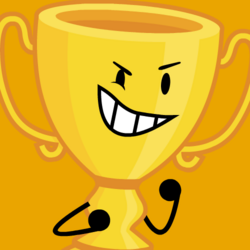