Inanimate Insanity Wiki
Register
Don't have an account?
Sign In
Advertisement
in: Featured Articles, A to Z, The Bright Lights,
and 10 more

Yin-Yang is the amalgamation of two characters: Yin and Yang. The two halves have vastly different personalities that contradict each other. They share one body and are in constant disputes, even over simple tasks, such as what direction to walk or what to drink.

Yin, the white half, is good-hearted, kind, honorable, and rational, whose intent is to balance out Yang, who is massively profane, malicious, and immoral. While Yin is happy to participate in challenges and actively tries to help out, Yang despises participation and typically enjoys the misfortune of other characters, and will lash out and attempt to harm others, including Yin.

This difference in character makes Yin-Yang's participation and handiness quite limited, sparking many enemies with others. Because they are attached, Yang doesn't get away with doing bad things as Yin can easily stop him.

When separated by Test Tube's experiment, Experiment 626, the balance between Yin and Yang got broken, causing Yang to become too chaotic, shambolic, destructive, and vicious on his own by breaking things and attacking characters. Though Yin was initially happy with the separation, he realized that his compassion was useless and concluded that fusing back together into Yin-Yang is the only way to stop Yang's violence.

In Inanimate Insanity Invitational, Yang has become less chaotic, although he still retains his disagreeable traits. It also appears Yin is more annoyed by Yang and doesn't really try to fight him that much anymore. Yin and Yang have calmed down since Inanimate Insanity 2 but they still disagree a lot.

As his name suggests, Yin-Yang is one of the symbols used in the Tao religion. He appears as a circular object split into black and white by a wave-like division. In Inanimate Insanity II, the white half, Yin, is on his lower left-hand side, while the black half, Yang, is on his upper right-hand side. Yin-Yang's mouth is on his white half, along with Yin's black eye, as the other white eye is on Yang's black half. He has two arms and two legs, which both sides can control at their own will. In Inanimate Comics, Yin is on the left side, and Yang is on the right side, more like the Yin-Yang symbol or taijitu in real life, which makes his body rotated about 90 degrees clockwise from his design in the show. 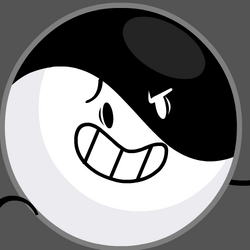